The 23rd Annual Northeast Motorsports Expo in Augusta, Maine will be the site of the next Busch North Scene: A Ten Year Retrospective book signing. It is shaping up to be the biggest yet too!

The author of the book, George Campbell, will be signing copies of the book all weekend at the show, and will be joined by many of the people covered in the book through out the weekend, including several of the drivers featured on the cover of the book.

NASCAR Champions Brad Leighton, Andy Santerre and Dale Shaw are featured on the cover of the book, and each will be joining George at the booth to sign copies at various times during the weekend long show. Andy will be in the booth signing copies from 6-7PM Friday night and again from 1-2PM Saturday afternoon. Brad will be in the booth from 11AM to 1PM Sunday morning. Dale will be there from 6-7PM Saturday evening.

Other key people that contributed to the book will also be in the booth, including NASCAR Championship Team Owner Steve Griswold, who wrote the foreward for the book. Greg Fish, who penned a couple chapters in the book, will also be present to sign copies. Steve will be joining Brad Leighton in the booth from 11AM to 1PM on Sunday.

There will be many other racers at the table through out the course of the weekend, as well as crewmembers, media people and officials that are included in the book. It will be a great opportunity to have your book signed by dozens of people in the book.

Busch North Scene: A Ten Year Retrospective looks back at NASCAR in the northeast region during the 2000 decade. The book looks back at the drivers, teams and people that made the NASCAR Busch North Series so popular at the start of the decade. There are over 125 photos in the book too.

The Northeast Motorsports Expo will be the best opportunity to have so many of the people featured in the book available to sign copies. There may never again be so many of the people featured in the book gather at one time.
The retail price for the book is $19.99 for the soft cover book and $29.99 for the hard cover copy. There will be both soft and hard cover versions of the book available for purchase at the show. There will be a special price for the first 100 copies sold on Friday night, just $10 per soft cover book. (plus tax, limit two per person) The hard cover version will also be on sale for just $25 – both Friday and Saturday.

Here is the promo blurb being used for the book:

George Campbell covered NASCAR for a variety of publications in the 1990s. In 1999 George recognized a void that he filled by starting his own newsprint publication, Busch North Scene. His goal was to cover NASCAR specifically in the northeast region. Within two years, George and the dedicated staff members had grown the paper into the number one selling NASCAR newspaper on newsstands throughout the northeast.

Busch North Scene: A Ten Year Retrospective recaps the racers, teams, and events that shaped the publication and the NASCAR Busch North Series during the 2000 decade. The book has fun and informative personal reflections from George and Busch North Scene staff members, as well as many of the personalities that made the series popular in the decade.

The book gives NASCAR fans from New England an inside look at the stars from the region during the late 1990’s and the 2000 decade. Within the books 330+ pages are over 125 photos mixed with personal reflections and amusing anecdotes on the drivers and events. Among the drivers covered in the book are Maine racers Ricky Craven, Andy Santerre, Joe Bessey, Tracy Gordon, Bill Penfold and Kelly Moore. NASCAR Champions like Mike Olsen, Dave Dion, Brad Leighton, Dale Shaw, Matt Kobyluck and Joey Logano are featured as well.

The book has been officially released, and I thought the book launch party at the Hilton Garden Inn in Auburn was a great success - as was the after party that night at the Turner Highlands.
I want to thank everyone that took part in that very special day to me.
I hope everyone that purchased a book has had the opportunity to read at least some of it by now. Please be sure to share your comments and thoughts here on this blog! I am looking forward to hearing some feedback on the book.
If anyone would like to purchase a copy, or would like additonal copies to use as gifts this Christmas, please send $20 per softcover or $30 per hardback plus $5 shipping for one, $8 shipping for 2 or $10 for up to 6.
Send a check or money order to:
Busch North Scene
542 Pleasant Pond Rd
Turner, ME 04282
Thanks again to everyone for their support!
Posted by George 'Soup' Campbell at 8:07 AM 10 comments: 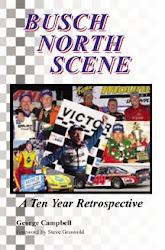 Order a copy of the book!

Send check or money order to: 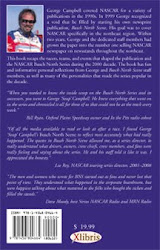